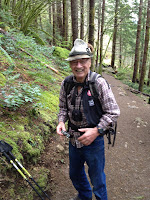 Ever have one of those mornings where you wake up and you find every excuse in the book to not to exercise? One of my old, mental, standbys is convincing myself that something hurts. Usually it’s something like I slept wrong and my neck feels a little stiff, or perhaps my ankle is a little grouchy. Whatever the minor reason, it gets inflated in my head and before long, I’ve talked myself out of a work-out. It doesn’t happen often, but when it does, I always feel disappointed that the ‘bad voice‘ won. Thankfully today, I ran into my Trail-Opa who made me think a little deeper about the benefits of getting out there. 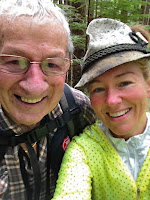 Meet Roman. Some of you have met him before, some have not. He is a local Northwest legend. In his prime he scaled many peaks and was an extraordinary mountaineer, both in the US and in Europe. Boeing brought him and his wife to the United States from Germany 30 years ago; they settled in the Snoqualmie Valley and raised children. Now his children are grown, their children are grown and he’s surrounded by great-grandchildren.

He wears his smile like a fine accessory on his face at all times and is never seen with out his German hat. He is (drum roll) 86 years old and hikes 1,200 feet of elevation gain, 3 incredible times a week. He has no hypertension, high blood pressure or heart problems and his balance rivals that of 30 year olds. He claims hiking has kept his aging body working, like a well oiled machine. He goes up the hard way, and goes down the easy way to preserve his knees. He takes his time and enjoys the things he sees along the way including other hikers. Often, in his thick German accent he says “I haf sumthing fer you”, and digs in his pack. Usually he pulls out some new gadget to show off, the latest one- a heart rate monitor so he could improve his hiking skills. He’s sharp as a tack and always asks how things are with me, remembering details we shared on our last visit. When it’s time for me to head up the trail, he takes my face in both hands and says “goodbye my beauty” and kisses my cheek.

Posted by Tami Asars at 8:03 PM No comments:

“Where are your hiking boots?”, asked the exasperated Mom. Trailing closely behind her was an awkwardly shy, pimply-faced teenage boy who hunched over at the shoulders as if the weight of his recent growth spurt was a burden. I knew exactly why she was asking before I pointed towards the back of the store with a helpful smile. Working in the outdoor industry had taught me the fine art of calculating the patience level of families during the stressful duty of outfitting their growing boy to send him off to the largest Boy Scout camp in the US. For most of these boys, a trip to Philmont Scout Ranch, New Mexico wasn’t just another boy-scout activity, but the right of passage into adulthood, challenging them physically and mentally. The Philmont treks usually consisted of 12 days in the backcountry, carrying 35-50 pound packs over 12,000 feet of elevation variables through upwards of 50 miles. This wasn’t just another scout hike, but the true test of grit and moxie complete with a shot of “keeping cool in front of their friends”. I walked with Mom back towards footwear to show her some options.

She knew full well what she was in for, when she arrived for this shopping mission. If juggling a house full of dirty tube socks and grass-stained baseball jerseys wasn’t enough, she had the challenge of upholding the very high standards of a picky teenager, who leaned more on how his friends would react to his new boots, than how they actually fit. He paraded up and down the aisles in the most expensive boots in the store, claiming they fit perfectly, while the furrow on Mom’s brow read a clear ticker of doubt, confusion and financial woes. We tried several pairs, but nothing appeased the boy more than the pair touting a high-dollar price tag and brandishing a familiar logo. “Let’s think about it,” said Mom.

“What about the pack?”. The boy threw his last negotiating chip down on the table in hopes Mom’s wallet would not be disappointed by the adventure. She turned, sighed and under her breath replied “well, we can look.” I knew these words as Mom-code for “fire some salt and pepper on these bones, because I’m done.” Her frustration was becoming more and more apparent, so I took the cue and hustled over to the backpack department. A wall of packs in various colors, sizes and prices hovered over us, shouting loudly. “This is the one Tyler has...” he acknowledged, pointing to a bright blue, high-end pack. Mom grabbed the pack and looked at the dangling price tag. I could see her worry as she put it back on the shelf. “Well, maybe Tyler saved his lawn-mowing money and bought it himself.” The game of word-chess had begun. They argued for a bit until Mom gave in to her exhaustion and had me adjust the pack for the a test hike around the store. The smell of Doritos mixed with cherry Slurpee wafted over me as the kid moved in closer for a look. I adjusted the suspension, tweaked the shoulder harness and loaded the pack with 35 pounds of weights and pillows. “How much weight are you putting inside of it?”. I could have said this question right with him. Every boy before him had asked the same one, then predictably strutted testosterone around the store announcing “this is nothing”. I just smiled as the boy did the same. Proudly he walked up and down the aisles, beaming from ear to ear with pride in the sack on his back. He could read the victory in Mom’s fatigued face as he continued his sales pitch, exclaiming “it feels AWESOME!”. The boy took it off, and held it tightly. Pointing out features was of little use to Mom who was ready to pay any amount to 'get this show on the road'.

Just then, I saw something in her face that I’d missed earlier. Happiness showed through flickers of sadness; the kind of face that we all make from time to time when something is bitter-sweet. Her baby bird was leaving the nest for Philmont Scout Ranch to find his wings. Perhaps the deepest thought that day was not one of price, or brand, or stubborn wills, but rather the realization that they eventually, grow up. Mom put her arm around the boy as they walked toward the registers, both of them grappling with newness, both of them holding prized possessions.

Posted by Tami Asars at 8:46 PM No comments: