The process of writing a trail guide could have an amusing anecdotal book of it’s own.  During the course of writing my next book, a day hiking series on Goat Rocks and Mount Adams Wilderness, I’ve met some interesting people, experienced some fantastic areas and been hit across the eyes with more spiders in cobwebs than I care to mentally revisit. 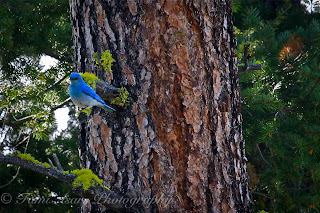 Some of the moments are fantastic, like the times where you are completely alone, but far, far from lonely.  On one such hike, I wandered through a forest filled with black-backed, and hairy woodpeckers gnawing away at burned saplings looking for tasty treasures.  The path was marked by only a few cairns, and I was grateful for the evidence that humans had, at one point, actually used lightly tread trail.  Further on, I followed a parade of mountain goat and elk prints on a faint dusty, ridge line until I busted out into wild flowers as far as the eye could see.  Sitting on top of the rocky perch, I noticed I was surrounded by Mountain Bluebirds.  Could this be paradise?  Perhaps.
But, some experiences are not so enjoyable.  For example, one time, I drove almost an hour on a badly pot-holed, wash-boarded dirt road towards a trailhead which I’d been assured was easily accessible. I got my workout that afternoon by hoping in and out of the truck moving various saplings, rocks and debris from the rarely used road only to find, after traveling an hour, the road was completely washed out and impassable. Turning around on the narrow, harrowing dead-end was fearful enough to shake me out of my socks.  Let’s just say that sitting on the patio of my favorite small-town burger joint that evening was a little bit sweeter and more enjoyable.
Another time, I lost the trail completely as the map I was following was incorrect.  Two hours were wasted wandering in and out of game trails looking for the main route up the mountain. I was never truly lost since I could always find where I started, but it was frustrating to make a full day of what should have been just a couple hours on the trail.  There were things to do and places to go!  When I finally located the trail, it disappeared again further up the peak, overgrown with trees and other foliage.  Mother Nature had successfully taken charge and decided against people using her shoulders to wander aimlessly.  Score one for her, and deduct a day for me. 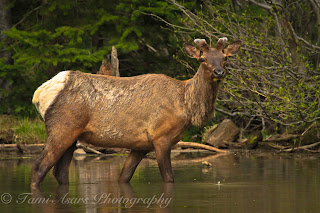 For all the challenges that trail hunting/guidebook writing/dirt documenting,  throws down, it seems to be a perfect fit.  Curiously I wander through each trail turn, writing notes and taking photos, excited about where each step will lead.  Sometimes I sing, sometimes I talk to caterpillars, sometimes I walk so softly that I forget I’m carrying a big stick (or in my case, a whopping camera lens).  One such time, I took a seat on a log near a lake and went about photographing Yellow-rumped Audubon’s Warblers as they searched for food in the Douglas Firs.  I sat so still that a bull elk failed to see me as he approached the waters edge and proceeded to eat aquatic grasses; going about his day without a hint of human.  I watched him for a long time before I decided to move, unintentionally scaring the poor thing half to death.  He zig-zaged up the lake’s bank, then let out a large bugle, (guttural screech) before he defiantly looked back, somewhat angry, somewhat curious. Moments like these make up a tapestry of mental artwork through spins of brush strokes colored with unfortunate experiences and fantastic adventures. Perhaps I’m a glutton for punishment, but more likely, I seek to find those areas I can share with others- the areas that give the soul a lift and seep a peace we can all feel through our skin.
happy trails!