the big old cat was covered in mud

There was nothing wrong with the cougar in the cage.  In fact, everything was right, very right.  He was a large mature tomcat and he was beyond angry.  But who wouldn’t be?  He thought he’d found a free dead deer for dinner, when “SLAM” the door had shut leaving him infuriated.  Thinking he could figure a way out, he’d spent some time fighting with the cage and getting more and more provoked as the minutes went by. Being in the woods for as long as he had, he was no stranger to hardships and the battle scars of missing fur showed near his nose and his mouth.  He was a beautiful creature, 162 pounds of fierce mountain lion, with paws the size of human hands and a long graceful tail for balance.  He was also an old boy giving away his age not only by the cataract on his left eye, but by the feral fire deep within drawn from years of adversity from turbulent conflicts of seasonal weather, battling for food and territorial disputes with other males.

I was lucky enough to have been invited to this event.  I’d met Dr. Brian Kertson when I was putting together public education programming while working for REI.  He came to speak on several occasions about cougars, their behavior and how it’s possible to live and play outdoors among these greats beasts. I admired his work in the field and longed to know more about his subjects of study, the most feared cats in the forest.  Dr. Kertson’s job was one of envy up with a twist of danger and passion.  As a wildlife biologist he was tasked by the Washington Department of Fish and Wildlife to humanely trap cougars, take their measurements and record their health, provide them with a radio collar, then see to their release.  The purpose of this data was to help wildlife officials understand cougar populations for purposes of forestation permits, human encroachment and hunting regulation.  Why anyone would want to kill one of these majestic creatures was unimaginable, but I knew it happened and to all things, there was a balance.

The big, old cat was covered in mud.  The rain had caused a mud bog of epic proportions within the cage and everything, down to his rounded ears was a mess.  I stood and watched as Dr. Kertson quietly walked towards the cage, the cat growling, hissing and slamming the steel sides.  Before long, the tranquilizer had the situation quiet and calm.  Gently, Dr. Kertson removed the sleeping cat from the cage and brought it to a shady spot to get his data. Drops were put into the cat’s eyes to prevent them from getting too dry during the exam. A black hood was placed over the cat’s head to keep him calm, should he start to slowly rouse.  Kertson went about his work, admiring and measuring the carnivore while keeping a sharp eye out for respiratory health during the anesthesia period.  As soon as it had begun, it was over and a medication was given to help the cat recover.

I stood back and watched the sleeping lion regain awareness. Despite being groggy and dizzy, he was full of punch, his good eye attempting to track the humans nearby keeping close visual contact while coming into consciousness. Knowing that the big cat wasn’t capable of full blows, was reassuring, but for safety, we stood back and observed.  Before long, the cat melded back into the forest and was gone.

There is nothing wrong with the big mountain lion that walks in the forest today.  Sure, he’s elderly, scruffy and wears a tan collar, but he is magnificent, savage and wild.  For the next several years, Dr. Kertson will know the whereabouts of this lion and will be able to find out important data, which may, even help lengthen the lion’s life. To all wildlife officials, like Dr. Kertson out there, that do this very difficult dangerous job because they care, thank you.  You do your job with professionalism, passion and concern for the creatures that roam this great earth. 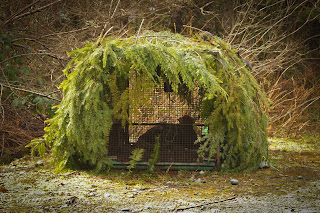 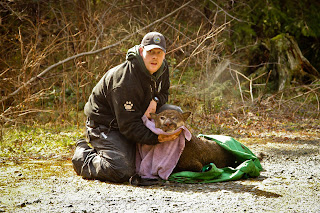 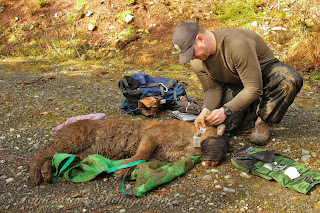 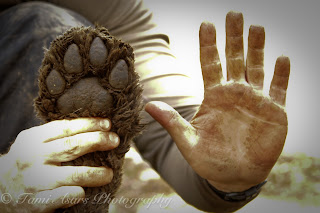 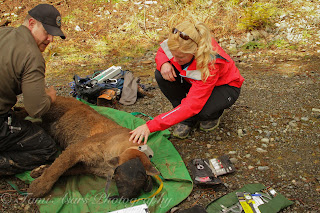 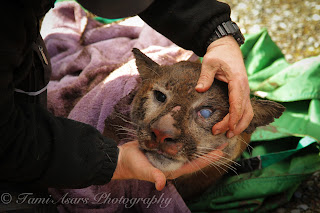 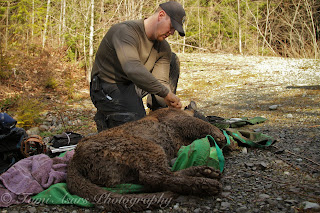 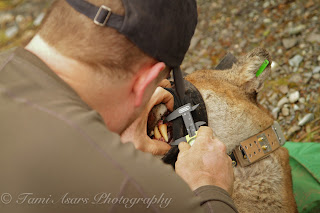 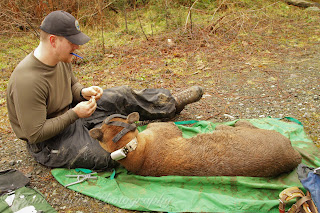 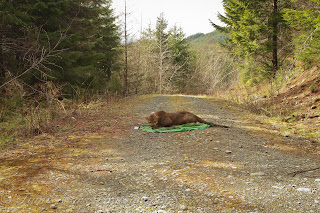 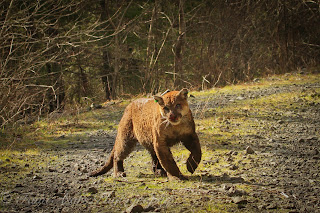 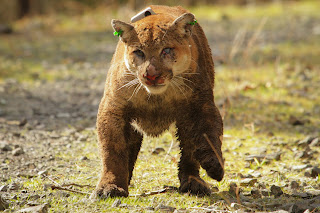 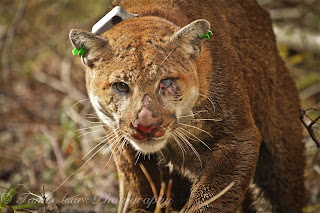 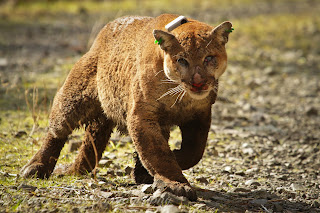 Posted by Tami Asars at 9:22 AM No comments: