this place was home

It was a glorious Thursday, one of the last of it’s kind before fall would come to the mountains and stretch it’s long nimble fingers into summer’s candy dish.  I had come to Mount Rainier to enjoy some quiet reprieve from the busy summer schedule and to put in roughly 12 miles, a feat that seemed pretty easy considering what my feet had endured over the last month.

On August 23rd, my husband and had I set off on the Pacific Crest Trail (PCT) from Snoqualmie Pass and hiked to Manning Park, B.C., a distance of roughly 285 miles in 13 days.  Due to 6 persistent days and 7 wet nights of rain, we’d pushed our feet, our minds and our bodies further than expected each day.  Our original goal was to cover at least 16 miles daily, but we soon found that we were more capable than we’d guessed and before long we were covering 24 miles, waking early and arriving to camp after sunset. One day in particular, we decided to push ourselves 32 miles, a feat that my feet were not quick to forgive. Regardless, we ended up arriving home the day before a giant storm, consisting of 6,000 lightening strikes and flooding that washed out roadways, would hit the Puget Sound.  Needless to say, our efforts were worth it. The journey gave my inner toughness a swift kick in the ribs.  Sitting under trees in driving, cold, sideways rain waiting for it to let up, caused me to dig deep into my spirit.  The miserable soaking we endured on one particularly wet, dreary Thursday made me realize how fragile humans are when put in the ring with Mother Nature.  No Gore-Tex in the world could withstand the copious amounts of endless deluge that saturated our fabrics and worked their way into our psyche.   The bridgeless, swollen river crossings tested our agility, or lack thereof, as one simple error could have led to an unimaginable fate. Then, the rain would stop, and the foggy, misty air would lift, revealing a spectacular green-so-much-it-hurt landscape wrought with small, wet creatures squeaking alarms as they sought food. One night we camped on a very high alpine peak and put the sun to bed with colors of red, orange, and yellow.  Crickets chirped and stars came out, shooting across the sky like rockets. We endured sunburn blisters, a grouchy Achilles tendon, wet feet, uneasy stomachs (too much backpacking food), and a frog that found his way into our tent. We gained trail friends, trail names, filty feet, physical and mental endurance and lifetime memories.

So, as I sat visiting with some folks who had come along the trail at Rainier just two weeks after my big trip, they were shocked. Was I really doing 12 miles today?  I explained to them that yes, I’d just come off the big trip and 12 miles felt pretty light. “So,” said one of the older gentlemen in the group. “Have you heard of the book “Wild” by Cheryl Strayed?  There is was.

For people who hadn’t heard of the PCT or perhaps didn’t know much about it, Ms. Strayed’s book had become a mascot or symbol of the trail itself.  It seemed no conversation about the PCT could be had without someone discussing the book and Ms. Strayed adventure. Like it or not, those of us who have been PCT hikers long before the books publication have now been forcefully connected to a lost soul who suffers greatly before hiking a portion of the PCT with no experience and little guidance, under the umbrella of mind-altering drugs and promiscuity. The book, I felt, was about Ms. Strayed struggle to become whole again and too reconnect with her lost self-esteem using the trail as a vessel for her adventure.  It very well could have been a train through Europe or a bicycle trip on the coast. Whatever the case, Ms. Strayed wrote a very raw, poignant autobiography about finding herself on the PCT, and because of it, thousands of backpackers who hiked the PCT after it, must now muddle through the question “Have you read WILD?” followed by a lengthy, discussion of the book.  So frequent is this conversation, that a PCT backpacker could make money by laying bets on when the conversation will happen and who will kick it off when mingling at a backyard barbecue or a holiday party. 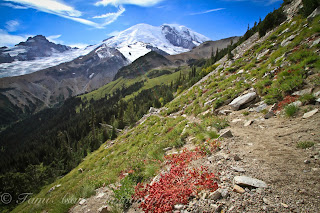 After nodding yes to the gentleman’s question, I bid them goodbye and put my on my backpack. My journey into the transition of fall was all over the ground in the form of a light skiff of snow, twinkling under the mares tail clouds masking the filtered sunlight.  I was on the trail again, and there was perhaps nowhere else in the world, I’d wanted to be.  This place was home.