Johnny Cash sang loudly as I drove down yet another dusty, potholed forest service road on my never ending quest of the grand grail of goals. "He asked me if I'd seen a road with so much dust and sand..." My daydreaming was cut off by the lyrics and I was sucked into the song.  It was so spot-on appropriate in that moment, that I turned it up even louder and sang. "I've breathed the mountain air, man..."

Yes, I felt like I had been everywhere.  I'd crossed swift rivers on teetering logs, encountered strange mountain men, twisted and cranked ankles in troughs of motorcycle tracks, been blown away by mountain grandeur, smelled more wildflowers than most florists, smelled more horse poop than most farmers, and played chicken with fear.  This day was yet another great day, filled with who-knows-what on a trail in who-knows-where.  I'd learned that just because it existed proudly on a map as a solid green line, did not mean that it existed in reality or that anyone but wildlife used it.

This day, there was a nip in the air and I could tell that fall was seeping in, much to my chagrin. I had so much to accomplish and strongly disapproved of the weather changes and the fact that I'd added extra layers including gloves to my backpack.  "More weight to haul around," I'd mumbled as I shoved them into the black hole of pack paraphernalia.  In my head I calculated how long until the snow arrived back up on these peaks and winter engulfed my beautiful green, subalpine meadows.  I told myself to relax and went back to focusing on the immense pot holes in front of me- swerving and zigzagging as I'd learned to do.  It would all get done.  "Of travel, I've had my share man, I've been everywhere..."I belted. 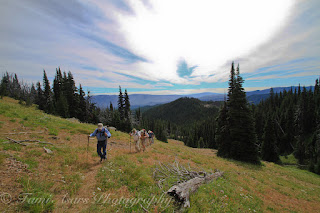 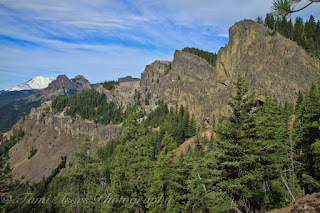 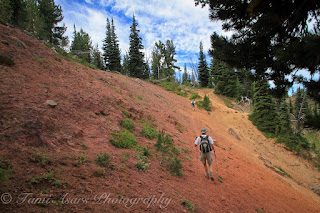