Never a dull moment!  Years ago I used to hear Brian Adams bellow the vocals of "the Summer of 69"  and wondered what that must have been like.  In my teenage-head I'd had several fun summers, but none that were as memorable as getting my first real 6 string, or standing on my mama's porsche.  Wait, that's porch isn't it?  Whatever. You get the point, nothing stood out as much as Brian's beloved summer of 69.  The summer of 2012 might change things.  There have been so many good and bad moments of this odd summer that at this point (settle in for a hiker joke) "I can't see the forest for the trees" (ba-dump-bump).  When it's all over, it may just inspire me to get a 6 string and compose lyrics.  Or a banjo, which would be much more fitting.  Take, for example, my run-in this week on Snipes Mountain.

First, off, I need to point out that V thinks it's weak of me to be afraid of cows, but I admit it!  I find cows scarier than pink meatloaf at a potluck.  Let's face it, cows are huge- I mean really huge. Add the fact they are conniving and it packs quite a fright.  Although, I learned this week that they are about as coordinated as a cross-eyes squirrel when they need to move quickly.  There I was, walking amongst burned trees, up on Snipes Mountain enjoying the lupine and fireweed, when I spied something large through blackened bark.  All I saw was part of a tan-colored mass.  My first thought was that I'd seen an elk.  A few more steps and I realized I was being eyeballed by several cows- just starring and chewing and glaring.  What in the sam hill were cows doing on a hiking trail?  Before long, I was surrounded by them.  One decided that it didn't like me and tried to run away, which sent the whole herd stampeding down hill- cow bells ringing, dust flying, all the while mooing while clambering and tripping over downed burned logs. What the heck? Do cows not know how to lift their legs?  Someone should invent cow-hurdles, just as a fun sport to watch.  I'd buy tickets.

Then I saw him.  He was pure evil and was giving me the stink-eye as we stood in the woods.  He was a bull, a big bull with sharp horns, angry as a wet hornet and not about to run or back down.  I had no choice but to find a tree to hide behind and wait it out.  A song came to mind and the only lyrics I knew to it got embedded in my head like a broken record that I had absolutely no control to stop.."Yippie yi yay Cow Patty...she rolled in to town to find the man that killed her daddy, yippie yi yay....cow patty."  Fitting, but annoying all the same.  "Who sings that stupid song?"...I wondered out loud as over and over my brain belted out "Yippie yi yay...Cow Patty". The standoff ended when the mosquitos found me and I had to logically choose between being eaten alive by hemoglobin hunters or facing the enemy.  I kept thinking how ridiculous it was to stand there behind a tree, scared of a cow!  I mean for crying out loud, cowboys ride those things.  What a pansy!

So, I walked out, strongly (completely freaked out), with my head high (walking gingerly), in a tough (yet cowardly) posture, bear spray, cap-off drawn like a sharp shooter in the old-west (Yippee yi yay...Cow Patty).  Luckily, I didn't bring bear spray to a horn fight and there were no issues. But, adrenaline was flowing and I learned that, yes, I'm totally afraid of cows.  If that makes me weak, so be it.

* Foolishly took the car out roaming (instead of the truck), thinking that “all-wheel drive” meant it could go anywhere. Found out this wasn’t the case and had to do a visual & physical inspection of it’s underbelly after trying to drive up a defunct forest service road, that was more like a washed out riverbed.  I might add, I know little about cars except that leaking oil or transmission fluid is baaaaaddddd.  Thankfully all was well, and I learned my lesson the hard way, as I often do.
* Saw three bears near Hamilton Buttes.  Count ‘em, three!  One is odd enough, but three?  They weren’t together either.  Saw two cross the charming forest service road (as described above) on the way to the trailhead and one on the actual trail.  He looked at me, then lumbered off.  I have that effect on most folks.
* Huffed and puffed up a peak only to find an unopened Miller Genuine Draft sitting by the benchmark, with nary a human in sight.  It was purposefully placed and piqued my curiosity.  During some exploring, I located a plague in honor of a man who died in 2009 and calculated that someone must have left him a beer.  Thoughtful!  Although, it might be frowned upon to drink in the afterlife.
* I discovered two ground bees nests on a rarely used trail and learned that they stay away from bug spray on skin (good to know).
* Met a couple nice equestrian folks in the beautiful meadow on Stagman Ridge.  The whole scene as they made their way towards me looked like a movie set.
* V came down for the weekend and we did some mountain biking in addition to hiking.  It was nice to give my feet a break and roll on wheels!
* We caught the Perseid Meteor shower over Mount Adams one evening.  We sat on the truck’s tailgate in a field and watched as they shot across the dark sky, breaking into flaming pieces.  A night I'll never forget. 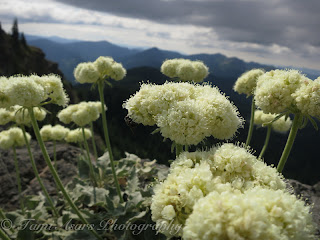 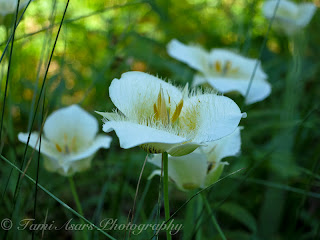 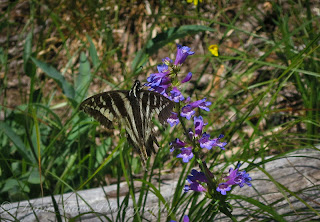 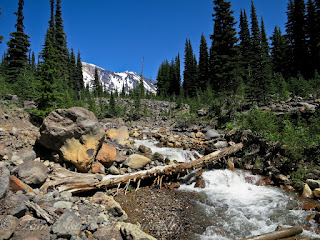 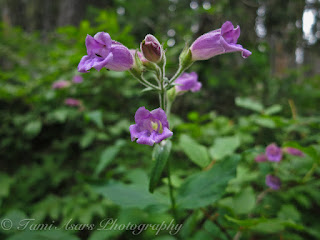 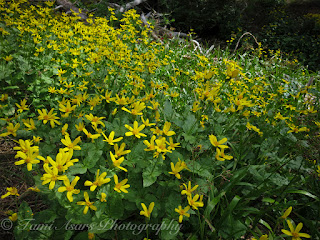 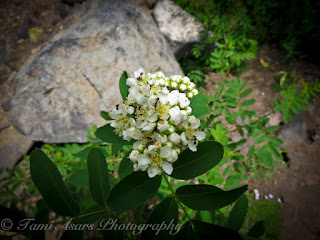 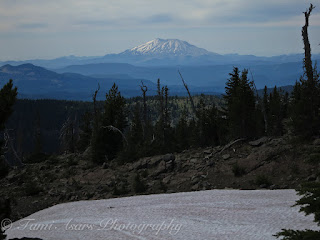 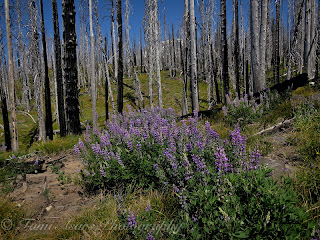 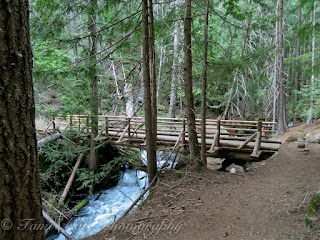 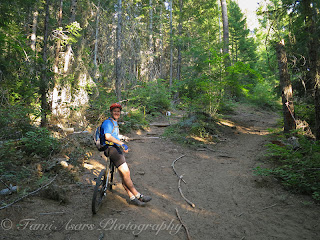 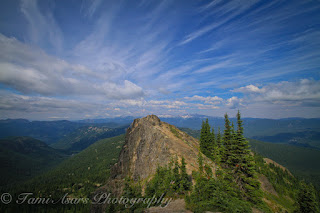 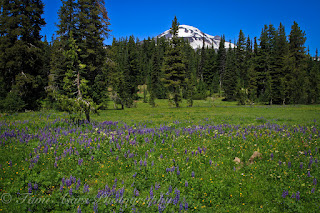 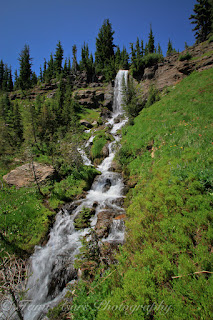 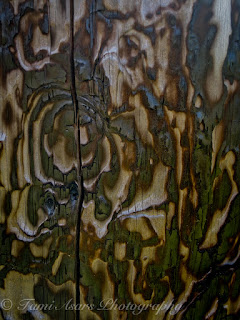 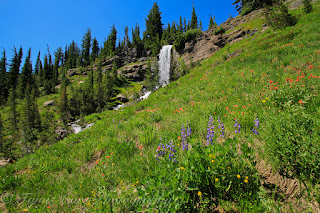