This weekend, I had the pleasure of hiking to the top of Shriner Peak in Mount Rainier National Park.  The colors were popping and the views spectacular of the surrounding peaks.  Winter didn't even hint of being around the corner.  Of course, the tower at the top, as always, brought excitement and curiosity.

Fire towers have long been a source interest; especially as I write guide books and climb up high to vistas where they once stood.  To learn more, I contacted Ray Kresek and purchased his book Fire Lookouts of the Northwest.  I'm having a hard time putting it down- oh the stories!

Most were built by the CCC (Civilian Conservation Corps) in the '30's, in the era when the 'green army' of Roosevelt's backcountry carpenters set out to learn skills and gain employment by improving upon public lands.  Originally, the fire towers were used to keep an eye out for storms, and report lightening strikes and fires by landline telephones.  After World War II, they became vistas for enemy surveillance.

Washington State originally had 639 fire look towers.  Due to destruction, less than 200 remain.
Many of these firetowers have been hit by lightening at least once, sometimes twice in one summer. Did you know that all of these towers had a solid copper lightening rod at the top, connected to wire that extended from the peak, down all four corners and downhill to dissipate the zap?  Staffers of the towers would hunker down on "hot seats" or "fire stools" which were small seats whose bottom feet were insulated by old-fashioned telephone insulators.  During a storm, the staffer would stand on the stool, sometimes for hours, especially when they needed to use the a landline phone or radio.  Bravely, they stood as thunder shook the landscape, hail pounded the structure and lightening struck tree lines all around the windows. 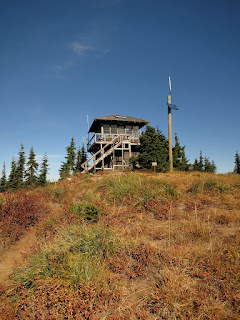 These old towers inspire such joy to so many people who hike to heights to see them, and the views that they share.  Each one is a piece of history and a glimpse into our past.
Posted by Tami Asars at 9:59 AM