grateful for the trail 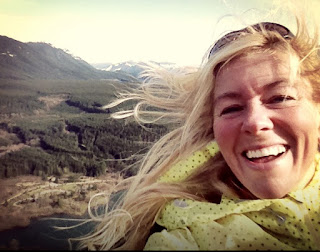 “Ekkkk, oh my goodness,” she shouted.  “It’s just so beautiful.”  From a few steps away I gave her an unexpected look to explore the sincerity of her comments. Sure, it was beautiful, but everyone and their Mother’s Brother’s Cousin had been up here before.  Right?  She ignored me and continued.  “Look at it over there!” she shrieked, pointing to the snow capped peaks along the highway.  “There’s a big lake back in there!”.  Her friend was much more quiet and subdued, but also had the wow-factor look in her eyes. “Will you take our picture?” She handed me her camera before I had the chance to answer, yes.

They were young, likely 16 or 17.  They’d shown courtesy when I’d passed them on the trail earlier, grabbing each other’s arms, giggling and hopping off to the side.  “I love your shoes,” one had shouted as I puffed by. “Thank you” I hollered back, trying not to let my voice interfere with my rhythmic breathing.  This trail was my treadmill.  I hiked here at least 3 times or more a week.  It was close to home. It was my respite from my busy brain. I knew every tree, every turn, every tiny contour, even every small change in tree branches that high winds brought. I knew the old trails where fewer people went, but liked the newer ones better.  I watched the seasonal hikers cut switchbacks. Then, I watched them grow back over when the masses left.  I scowled over trash left by careless people and felt joy seeing toddlers hand in hand with their parents. I hiked in pouring rain, in ice storms, and in miserable drizzle. On this day, all I wanted was to feel the burn, surrounded by the bark, pebbles and leaves that had become some of my best friends. So, when the girls had the courtesy to move aside and grace me with a smile, I’d wanted to give them high fives.  Head down, I was on a fitness mission and there was no stopping this sweaty, trudging, power train.

I grabbed her camera and snapped a few photos of their smiling faces.  Usually my stops at the top were just enough to look around, take a deep breath, then begin my run down.  This day, they had indirectly asked me to join them in their moments of awe.  It was beautiful.  I had taken it for granted on so many of these very days. A rare winter day of ice and sunshine was upon us, freezing our faces and forcing us to step carefully.   “Wow, those photos are great!” said the taller of the two flipping through her digital camera.  She continued with energy that only a teen can muster, “Facebook will be happy.”  I smiled back and said “Good!  If I was Facebook friends with you, I’d like your photo.”  She paused and thought a moment before speaking.  “Well, we are friends now in the real world, instead.”  Good point, I thought.  “ I like that world better,” I said with a smile.  “Me too,” she said as she and her friend gingerly wandered across the frozen surface to take more photos.  I turned back the way I’d come, grateful fate had twisted me to take a few more moments than usual to enjoy nature’s gift.